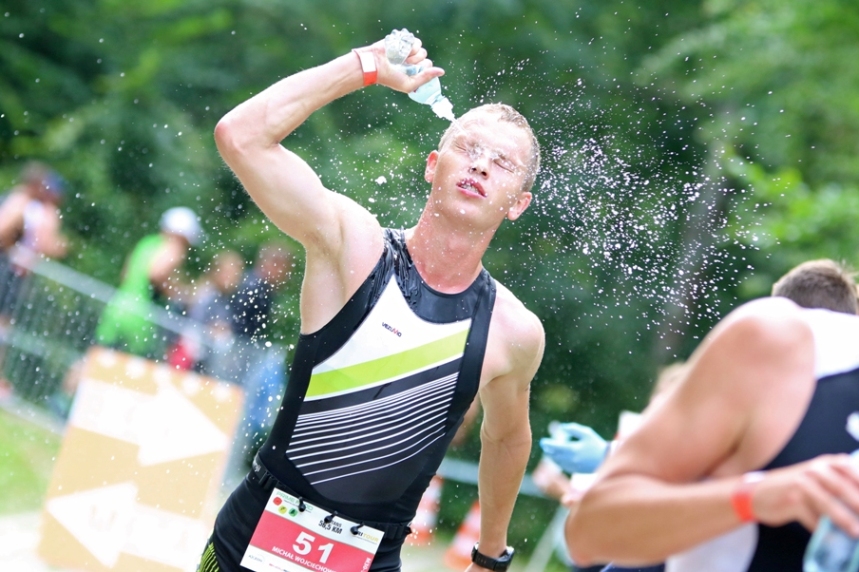 More than 6400 liters of water and more than 1 ton of fruit (bananas, oranges and watermelons) were needed by participants of the Prime Food Triathlon 2017. The fifth edition (jubilee) of the event was attended by 763 of the more than 900 triathletes who put themselves forward to take part in our event. Numerous guests, fans, volunteers and local residents have created a warm and unforgettable atmosphere. Thanks to the event, over PLN 4,500 was collected for Człuchowski County Nursing and Education Center.

This year’s Prime Food Triathlon took place on 26-27 August 2017 in Przechlewo.  The participants swum, cycled and ran over 3 individual distances (28.25 km, 56.5 km or 112.99 km) or 1 distance for the relay (56.5 km).  Some athletes have successfully taken part in more than 1 of them. Magdalena Wiśniewska won in the female category at a distance of 28.25 km and 56.5 km, and other participants tried their strength, for example at 28.25 km and relay. The competitions were evenly matched and they provided many sporting and non-sporting emotions.

Motivational and mental support was provided thanks to the supporters and volunteers.  The competitors were “recharged” with loud  cheering, and the food and the finisher areas – with the necessary liquids and calories. In addition to the aforementioned fruits and water, there were also isotonic drinks (over 2700 liters), energy bars (over 1600), vitamin jelly (over 1030 packages). The pasta party,  at the finishing area and the gastro zone also distributed more than 170 kg of cakes, countless hamburgers, hot dogs, pizza, juice and beer. The safety and comfort of the competitors was assured. Service representatives and a team of about 200 volunteers, supported the Tribloaters with engaging and motivational cheers

– I had the opportunity to “test” the tour and the facilities of our events on both Saturday and Sunday.  Despite the different times and different weather conditions one  thing remained unchanging – the enthusiasm of the volunteers, who carried us to the very finish, was noted by Paweł Nowak, President of the Prime Food Board and co-organizer of the event. – On behalf of your team and organization, thank you all for such a beautiful jubilee! I would like to express my special thanks to those who contributed to the preparation, organization and creation of the event climate, and above all: the players, the volunteers, the supporters, the residents of Przechlewo and the surrounding area, all departments, local authorities, co-organizers, sponsors and partners.

Help and fun in masterful style This year, PLN 5 from each buy-in on the Prime Food Triathlon Przechlewo was allocated to the Department of Nursing and Education Centers in the Człuchowski District.   As part of the thanks, the young students prepared for the participants more than 900 handmade souvenirs. Help for the center was one of the few high-end triathlon jubilee initiatives. In Przechlewo there was also blood donation and registration for the data base of potential donors of bone marrow (organized by the Człuchowskie Honorary Blood Donors Association and DKMS Foundation). 21 people have submitted their blood donation and have returned 14. DKMS has 9 potential new bone marrow donors. In addition, the Prime Food Triathlon 2017 program featured the following: Ania Karwan’s concert, cheerleading and banner competitions, Children’s shows and activities (including MiniTriathlon prepared by Junior Football Academy) and other interesting initiatives. At the end of the weekend sports, the organizers along with the Niedzwiady Forestry Department planted a memorial beech on the grounds of the event.

– With the end of the jubilee competition we started the team preparing for her next edition. We hope that in this, and even much broader group, as witnessed by the opinions of visitors and their loved ones, we will meet in 2018.  Already I would like to encourage everyone to join us for next year’s Prime Food Triathlon, which will take place on 25-26 August 2018. Warm atmosphere, unforgettable experience in beautiful scenery and additional attractions guaranteed! We will start registering people in the autumn – said Paweł Nowak from Prime Food.

Prime Food Triathlon Strike 2017 was the last event this year to be one of the largest Triathlon events in Poland – the Tri Tour. During the event the Tri Tour Cycling Club Championships were played. The results of the competition in Przechlewo can be found at http://sts-timing.pl/event/prime-food-triathlon-przechlewo/.

How the Final Numbers Looked: